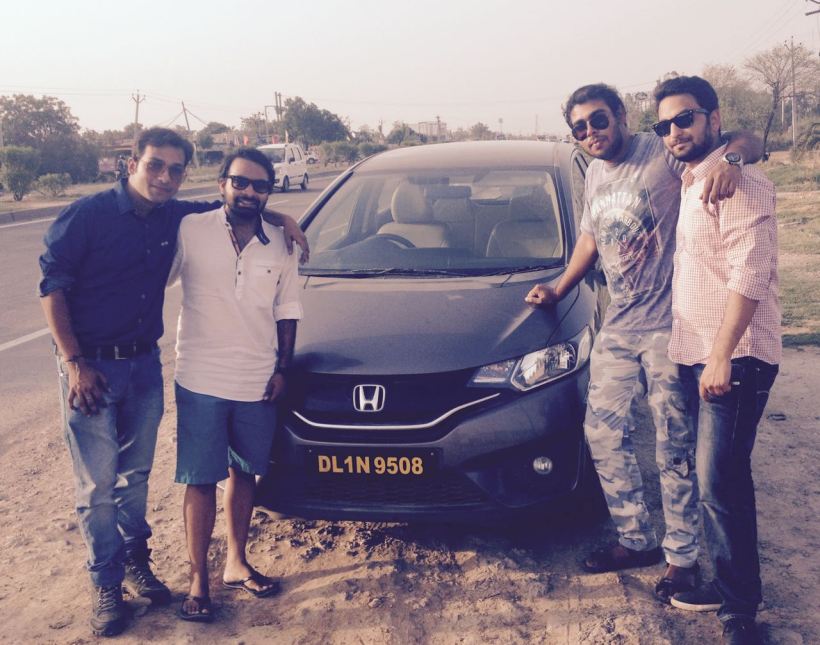 “It doesn’t matter where you’re going, it’s who you have beside you”

This one I’ll try to keep short. First of all, let me clarify that ‘Kasauli’, ‘Kasol’ & ‘Kasauni’ are all different and excellent locations. Kasol  is at a higher altitude than Kasauli, whereas Kasauni is in Uttarakhand. After the end of SIP and before the trip to Roopkund trek, I had a spare time of 3 days. So another short trip had been added to the list:  a self-drive car, four friends and an awesome ride to Kasauli.

The plan was all set to roll. Tushar, Ankit and I were at Delhi only, the other friend – Chandan flew from Chennai to New Delhi just to make this trip happen. Most of the planning was done by him only. The plan was to take a self-driving car and enjoy the journey ‘Dil Chahta hai’ style :p After a brief cost analysis, we settled with ‘Myles’. Myles takes INR 5000 caution money(Refundable) + Rent of Car (Excluding Petrol). It had no per day KM limit. We went for a Honda Jazz at INR 4400 for 2 days.

We started from Delhi on 2nd June. The early risers – Chandan & Ankit  went early and picked up the car and then  picked rest of us. The GPS was set on the mobile, the car-speakers were given a bassing start with the latest Punjabi hits and the wheel was all set on its most adventurous journey. Chandan and Ankit were the buoyz behind the wheels. Their first ride in hill area.

On the way, we stopped at Amrik Sukhdev Dhaba, Murthal, Sonipat and served ourselves with mouthwatering buttered paneer paranthes and Alu paranthes and ofcourse the famous Lassi. I went for the Mango Lassi J It was a Dhaba just for namesake, but looking like a 4 star hotel. It had the capacity to serve 500+ persons at a time. It is difficult to even get a seat there most of the time. 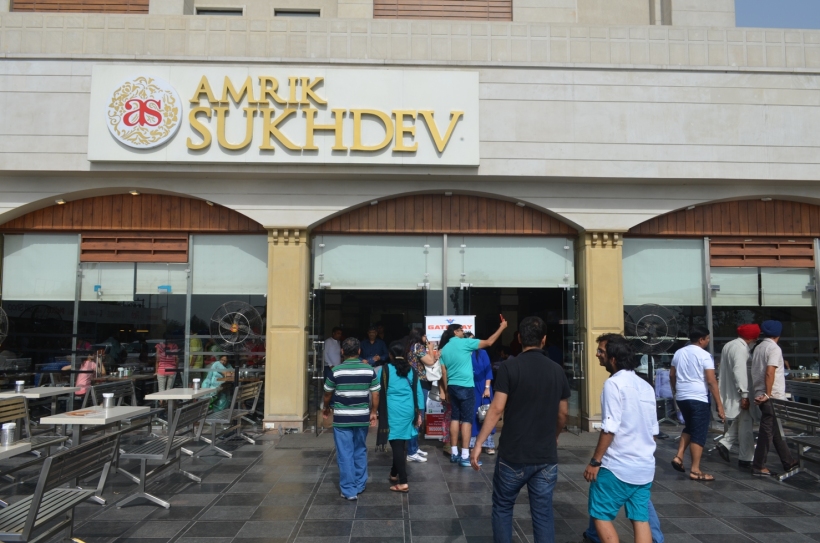 Then the real journey started. We were meeting after a year, there were lot to talk about. To go from Delhi to Kasauli, one need to pass through Haryana, Punjab, Chandigarh and HP. The only problem with self-driving car in interstate travel is the roadtax. We had been instructed to pay the roadtax for Chandigarh and HP. Roadtax for Haryana was already paid. It was difficult to figure out in which state we were in. After asking a few locals, we found out that there was no need to go Chandigarh. We could take a right turn at Zirakpur. A short stint of the route(around 15km) was passing through Punjab before entering HP. We searched online to pay roadtax, but Punjab roadtax site is one of the most complicated site I have ever seen. One need to enter all the districts he is going to pass by to generate the receipt. Then we looked for RTA office to pay offline. But we found none. Just before 500m to Zirakpur, we came across a traffic post. When the traffic police saw the color code of our car no plate, he got that he had got a scapegoat. Leaving the traffic-post, he came running to our vehicle and asked for pollution receipt and roadtax receipt. Obviously, he found none and we had to settle the thing. The funny part was when we asked what to do in rest traffic posts ahead, he asked, “Who is driving?” Then he draw a ‘X’ on his wrist and told that whoever would ask, just to show that :p

Then after a few mins, we hit HP. There we found the RTA office, just near the border. The path got narrower and riskier. We stopped at Dharampur and had a sumptuous lunch. Then moved ahead to Kasauli via Garkhal. The road was getting steep and extremely narrower. For a first timer, it was really tough to ride in those road, still Sir Saraf managed till we reached Ankit point. At one point, we came across a sudden turn where the road was also very steep. We couldn’t detect that turn beforehand and shoot a little ahead. Now in that steep road, breaking and turning was a real tough job. Sir Saraf cleared that with flying colors anyhow.

We had pre-booked at Nature’s Stay Cottage, Kasauli which was a little down from Kasauli. We reached there and got freshened up. The rooms were really nice and the view was amazing. 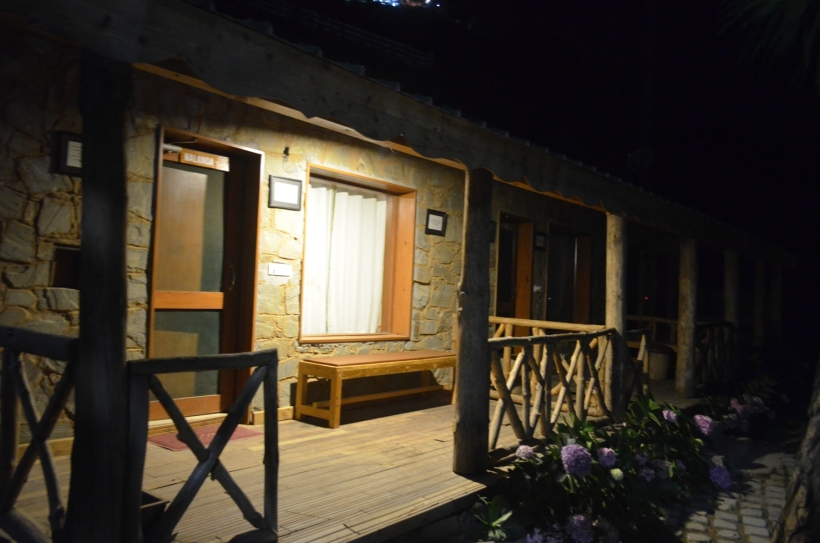 We asked the hotel manager to  find a driver as we wanted our time to fully utilized rather than finding route. In the evening, we went on a visit to Sun set point, Kasauli Market(Upper mall and Lower Mall) and Christ Church. 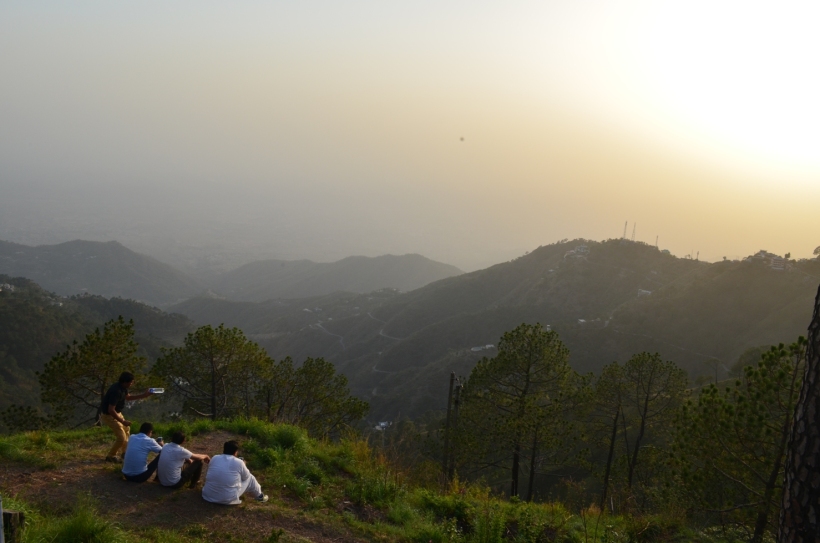 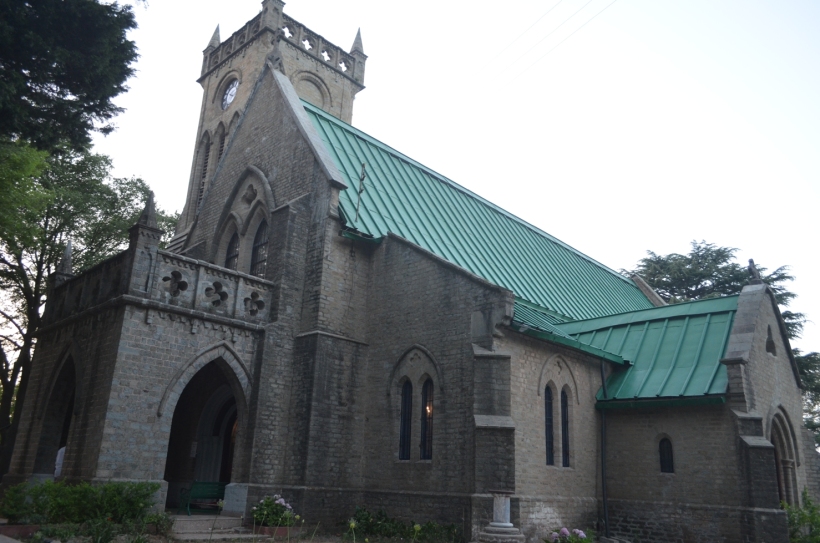 We tried Tibetian momo and returned with a few booze. Under the starry sky, the party started. We could clearly see the light going off one by one at the town below. The weather was perfect, neither too chilled nor hot. 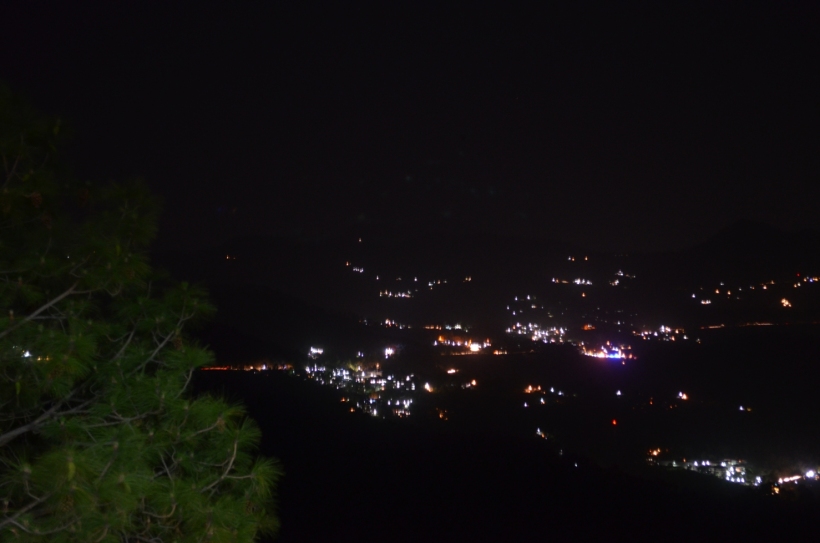 View from the balcony

Next morning we woke up and had Cholle-Bhatore as breakfast. Then we had a photoshoot session at its open space. 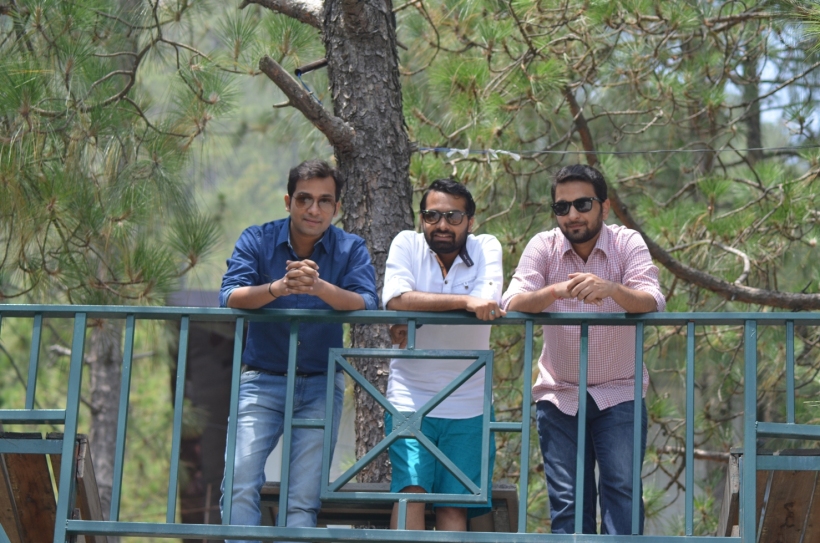 From a tree house

The driver was supposed to arrive at 10AM, but arrived at around 12 noon. We then went for Monkey point- the highest point at Kasauli. On the way, someone told that it was closed due to maintenance that day, but we still decided to pay a visit. After reaching there, we saw this notice of “Close due to maintenance”, but after a little inquiry we got to know it would open in 30 mins. So we waited. No electronic gadgets or equipment were allowed inside that. The area  was all covered by army personnel. 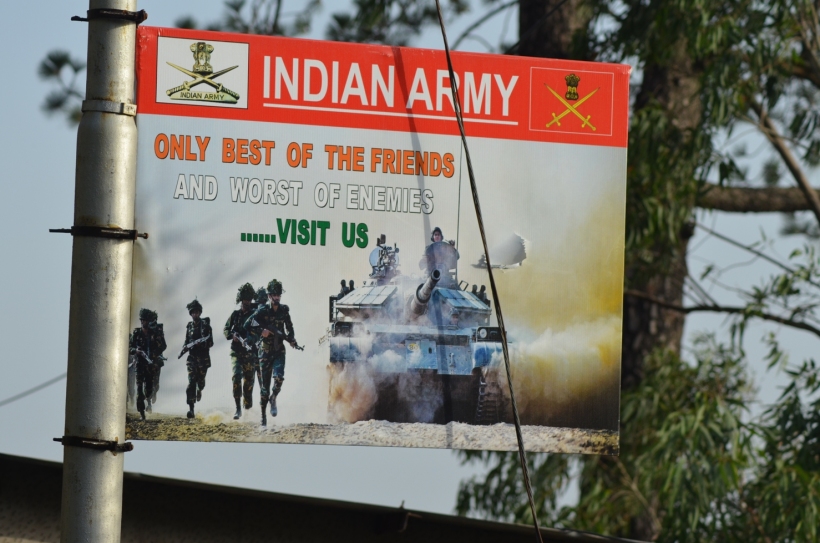 After climbing around 230+ staircases, we reached the top of Monkey point. The view was amazing from the top, but unfortunately I didn’t have my camera 😦  There was a temple of Lord Hanuman there and a helipad. One could clearly see the nearby area from that top. 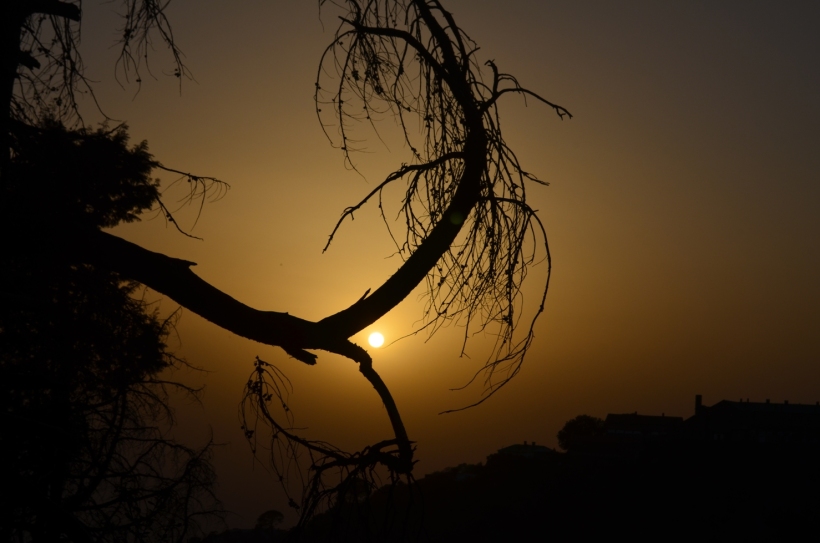 Then we returned directly to Dharampur, there we relieved the driver and Sir Saraf took the charge of the wheel. The return journey was smooth and we arrived at New Delhi around 11 PM. It was hell of a trip: company of friends, heart-throbbing ride, awesome weather and mesmerizing site- everything was perfect.

Tada till the next one…

Freshen up in the resort and go out to explore Kasauli

Places to visit in Kasauli

6) Scandal Point & Lovers lane :  A few metres ahead of the Sunset point. Place for honeymooners

3) For Non Vegetarians Ham, Bacon, Salami, Sausages are made by The Daily Needs Store , adjoining State Bank of Patiala, Kasauli .

4) Dumplings (Momo’s) in the Tibetian market . It’s something different than the normal Momo’s we get in regular cities

Hi ! I'm Alok, from the so-called holiest place on this earth- the Jagannathdham , Puri, Odisha, India. Though there is little holiness in me :P After the graduation from National Institute of Technology, Rourkela in Electronics & Instrumentation Engineering, I joined at one of the Leading Stainless manufacturing companies as Associate Manager.Then I went on to pursue MBA in Business Management at XIMB. I love to travel, to explore new destinations, taking the path less traveled by. I'm more of a backpack traveler and have completed four high altitude treks so far(HKD, Ilaka Got, Roopkund & Everest Base Camp). I'm fond of Landscape Photography and I love adventure. In last two years, I have traveled Dubai, Europe(Netherlands, Czech Republic, Austria, Hungary), Nepal, Bhutan, J&K(Ladakh, Jammu, Srinagar), Rajasthan(Jaipur, Udaipur, Pushkar, Ajmer), Goa and couple of weekend getaways from Bangalore and Chennai (Pondicherry, Mamalapuram, Kodaikanal Wayanad, Coorg, Chikmagalur, Mangalore, Udupi) to name the major ones. This is a platform to share all those special memories, ideas, clicks with you all. Join me in the journey.... Keep traveling, Keep living. *Contact: tektriphy@gmail.com

My Linked In Profile

This page has witnessed